What is a donor-advised fund?

Technically, a donor-advised fund is an agreement between a donor and a host organization (the fund) that gives the donor the right to advise the fund on how the donor’s contributions will be invested and how grants to charities (grantees) will be made. Contributions may be tax deductible in the year they are paid to the fund, subject to the usual limitations, if they are structured so they aren’t considered earmarked for a particular grantee. Though they can bear the donor’s name, donor-advised funds are not operated as separate entities like private foundations are, but are merely accounts held by the fund. The fund owns the contributions and has ultimate control over grants. 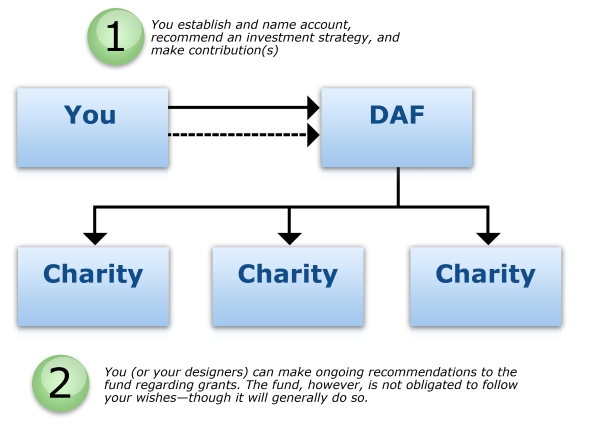 The community foundation was the first type of host organization to offer donor-advised funds but, today, many financial institutions offer them, and many public charities have funds or will create a fund upon request.

How does a donor-advised fund work?

It’s easy to set up a fund account. The donor first signs a letter of understanding with the fund, establishes an account, names the account, and recommends an investment strategy. Then, the donor makes required minimum contributions of assets, which may include cash, marketable securities, and other types of assets, depending on the fund. The required minimum contributions vary from fund to fund, but are usually less than those required by private foundations.

During life, the donor (or the donor’s designee) can make ongoing, non-binding recommendations to the fund as to how much, when, and to which charities grants from the fund should be made. Additionally, the donor can offer advice to the fund regarding how contributions should be invested. The donor may suggest that, upon death, grants be made to charities named in his or her will or other legal instrument such as a revocable living trust. Or, the donor may designate a surviving family member(s) to recommend grants. However, the fund is not obligated to follow any of the donor’s suggestions–hence the name “donor-advised fund.” As a practical matter, though, the fund will generally follow a donor’s wishes. Distributions to grantees are typically identified as being made from a specific donor’s account, but they can be made anonymously at the donor’s request.

A donor-advised fund usually receives contributions from many unrelated donors (though donors’ accounts are kept separate), while a private foundation is typically funded by one source (an individual, family, or corporation). While donors to a donor-advised fund may only offer advice regarding grants and investments, private foundations offer the donor exclusive control and direction over grants and investments, an attractive feature to some philanthropists.

Also, donor-advised funds do not need to fulfill many of the reporting and filing requirements that are imposed on private foundations. And because the fund handles any legal, administrative, and filing requirements (including tax returns), the donor is completely freed from these responsibilities. In addition, since separate accounts within a donor-advised fund are administered as part of the larger host organization, the administrative costs borne by the donor are generally lower than those incurred by a private foundation.

Endowed funds only distribute income, not principal. These funds invest a donor’s assets in perpetuity for potential growth over time. Because they are permanent, endowed funds provide a lasting memory of the donor’s philanthropic nature.

Non-endowed funds permit a donor to make ongoing recommendations for grants up to the entire fund balance (principal and income). Such funds remain non-endowed, unless the donor specifies otherwise, until such time as the donor or the donor’s designees are no longer providing advice to the fund.

A donor can generally take an immediate income tax deduction for contributions of money or property to–or for the use of–a donor-advised fund if the donor itemizes deductions on his or her federal income tax return. The amount of the deduction depends on several factors, including the amount of the contribution, the type of property donated, and the donor’s adjusted gross income (AGI). Generally, deductions are limited to 50 percent of the donor’s AGI. If the donor makes a gift of long-term capital gain property (such as appreciated stock that has been held for longer than one year), the deduction is limited to 30 percent of the donor’s AGI. The fair market value of the property on the date of the donation is used to determine the amount of the charitable deduction. Any amount that cannot be deducted in the current year can be carried over and deducted for up to five succeeding years.

Additionally, donor-advised funds are not subject to the excise taxes levied against private foundations.

There are no federal gift tax consequences because of the charitable gift tax deduction, and federal estate tax liability is minimized with every contribution since donated funds are removed from the donor’s taxable estate.

Harry, Wilma, and their children own a business that has enjoyed financial success for many years. Harry and Wilma show their appreciation to their customers by making donations each year to many of their community’s charities. Harry and Wilma would like to continue the family legacy for successive generations, but no longer want the year-end stress of selecting the charities they want to support and distributing checks.

Because of the host community foundation’s charitable status, Harry and Wilma can take an immediate income tax deduction for the fair market value of their shares and investment account. If Harry and Wilma had created a private foundation instead, their deduction would have been limited to their cost basis in the donated assets.

The fund subsequently sells the donated shares with no capital gains tax liability. The assets in the fund appreciate tax free, and when Harry and Wilma die, the assets will not be subject to estate taxes.

The fund will handle all the bookkeeping and tax reporting, make the ongoing investment decisions, and assume fiduciary responsibilities. Harry and Wilma can put their time and effort into running their business.

Harry and Wilma name their children as successor advisors after they die.